Have you seen the movie Edward Scissohands with Johnny Depp? It is about a man who is “created” by a scientist, a little bit like the creature in “Frankensteins monster”. But the scientist dies before he is able to finish his creation. Edward was temporary made with scissors as hands but now he is stuck with them permanently. This leads up to different kinds of situations and problems which are shown is the movie. 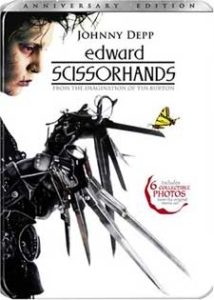 “I feel like Edward Scissorhands”, said a close friend, who previously had been brave enough to share the fact that she suffers from hyperhidrosis of the palms. She then told the story of how limited her life feels and that she almost cant use her hands because of the sweating. The keyborad of the computer gets wet, as well as the paper when she is writing with a pencil. She cant use her smartphone because it is like she has put her hands in water before trying to use the phone. “You avoid physical contact”, she said. “Touching people. Shaking hands, holding the hand of someone you like. Touching your partner during sex. All this, you try to avoid because it feels so uncomfortable to leave everything and everyone you touch soaking wet. Now when I had a baby I even leave him wet when I hold him, because of my hands. Maybe thats okay in the summer”, she continued, “but in the winter he becomes cold fast when he is wet”. It becomes a huge problem. And what if he inherited the condition (hyperhidrosis) from me”? My friend looked worried and there wasnt much to say to comfort her. I know that life with hyperhidrosis can be tricky, in the best case and unbearable in the worst. Luckily, she “only” had hyperhidrosis of the palms. This area of the body, along with the armpits are the boy parts most commonly examined in scientific reports. Since other body parts have not been studied, a lot of doctors and medical personnel say that you cant treat hyperhidrosis of “other” areas.

One usually talks about science as well as proven experience. When studies have not been made in an area but clinical use has shown a results after many years that can be equally important as the result from any study. Hyperhidrosis of other areas than palms and armpits have been treated with for example injection treatments, in some countries, for decades. But it is still common that the effect of treatment effect in these areas is denied. We are trying to spread information about hyperhidrosis and that there are effective treatments even if the hyperhidrosis is located to other body parts than palms and armpits.

No one should have to feel like Edward Scissorhands or let the excessive sweating control their lives. Hyperhidrosis of the palms can be treated with for example antiperspirant deodorants, injection treatments, sometimes with pills or iontophoresis devices (which are what we sell here att Hidroxa). Dont forget to be diagnosed by a doctor before starting a treatment because other causes of excessive sweating need to be excluded.

At Hidroxa, our mission is to help people that are affected by hyperhidrosis – excessive sweating. We’re offering a simple, effective, and accessible method for treating hyperhidrosis called iontophoresis.

Language
Categories
Recent Posts
What are you looking for?